George Michael has been sentenced to eight weeks in jail for driving under the influence of drugs. 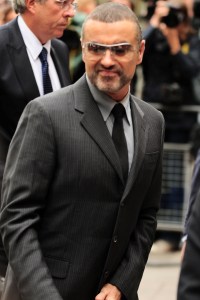 George Michael was sentenced to eight weeks in jail by a British judge for acts stemming from a July 4 incident.

The repeat offender originally pleaded guilty in August, after he was caught driving under the influence and found in possession of cannabis on July 4. George Michael also crashed his Range Rover into a Snappy Snaps photo shop.

The sentencing took place on September 14 at Highbury Corner Magistrates’ Court. Michael was also fined 1,250 pounds or $1,930 American dollars. The ironic part of all this is George Michael will probably only serve half the time before being considered for parole.

The 47-year-old singer has been linked to a string of marijuana offenses as of late. So, is he a bad driver or is the pot to blame? You be the judge.

Back in 2006, George Michael was caught “slumped” over the wheel of his car at London’s busy Hyde Park Corner. In April of 2006, he smashed into three parked cars while trying to get out of a parking space.

In October 2006, George Michael pleaded guilty to driving while under the influence of drugs and was sentenced to community service.

Okay, I’m almost done with this list. Last year, the messy driver was part of a crash with a truck outside London. The kicker? He says he was “stone cold sober” at the time.

I’ll have my eye on this one. Tell SheKnows what you think of George Michael’s sentencing.

Read on for more George Michael