Sacha Baron Cohen and Isla Fisher have welcomed their second baby into the world! 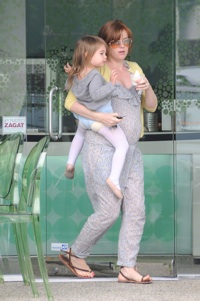 The very private couple, who already have one adorable daughter together, have not made an official statement about their new baby.

Isla Fisher and Sacha Baron Cohen are definitely not a couple that will beg for privacy then turn around and exploit their baby for cash on the cover of a magazine.

Now the little family has been spotted out and about in London with a pram. Since their first child, a cutie patootie girl named Olive, was seen walking with them holding her daddy’s hand and looking much too big for the lay-down stroller Isla was pushing, that leads to just one conclusion: Their second child has arrived!

Of course, we have no idea what the new baby’s name might be, when said child was born, or even whether they had a girl or a boy — but if that baby is lucky it will have Isla’s gorgeous red locks and Sacha’s wicked sense of satire!