Fans of The Oprah Winfrey Show have seen Nate Berkus pull off over 100 design makeovers already. After almost nine years with Oprah, Berkus goes solo with his own talk show, The Nate Berkus Show!

Oprah introduced the world to Phil McGraw, Rachael Ray and Mehmet Oz, who all ended up with their very own shows. Now, she has helped launch her resident design expert: The Nate Berkus Show premieres September 13! 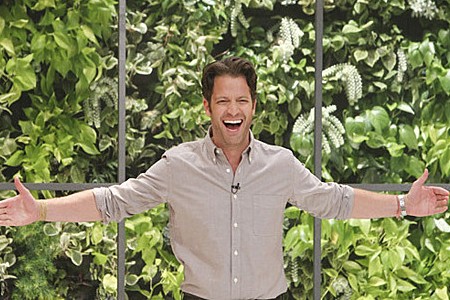 “I can’t believe it’s finally here,” Berkus blogged. “I am so proud of what my team and I put together! From the show graphics to the guests, I couldn’t be prouder! The most amazing part, this is just the beginning.”

The Nate Berkus Show is obviously built around style, but guests from different walks of life will also be there to get personal and dish about topics like family, relationships, entertaining, finances and getting organized.

While the show is about lifestyle as well as style, Oprah’s design guy has created quite a designer’s studio for his new syndicated talk show!

In addition to an entire wall of living plants, his homey lab includes the Instant Design Studio, which uses 3-D gaming technology to create virtual spaces. That means viewers can actually see what he has in mind before any legwork or changes have been done!

No doubt, fans will soon be sending out prayers for their own Nate’s Crate delivery. Berkus plans to surprise guests, viewers and who knows who else with special deliveries that come in, as the name suggests, a big crate.

“There’s never been a show like this on TV,” Berkus promised. “Everything I’ve learned, I’m going to teach this audience.”

Guests on upcoming episodes include Dolly Parton and Jamie Lee Curtis, but for today’s premiere episode, Berkus had Elizabeth Edwards as his guest and also surprised a single mom with a kitchen makeover.

Elizabeth Edwards dishes about her new Chapel Hill interior furnishing shop Red Window and also opened up about her battle with breast cancer and her mortifying public breakup with former presidential candidate John Edwards, who infamously had an affair and a baby on the side.

While the show offers big promise for viewers, it will also go down as the first big time talk show hosted by an outwardly gay man, marking a momentous step for gay America.

Find out where The Nate Berkus Show is airing in your area by visiting the show’s website.