The fourth season of Gossip Girl premieres Monday, September 13, and we’ve got an inside scoop! 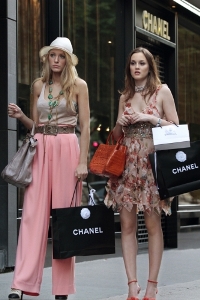 Gossip Girl executive producer Stephanie Savage said that Blair Waldorf, played by Leighton Meester, and Serena van der Woodsen, played by Blake Lively, will both remain single with less mingle when they return from Paris to New York in the season premiere.

“Blair is pretty clear with Chuck about her emotions,” Savage said. “We’re a long way from forgiveness and peace.”

That hot-blooded pair will continue to have a complicated relationship, but after Blair’s crumble last season when she learned of Chuck’s latest indiscretion, Meester’s character is focusing entirely on Columbia University. “She’ll be thinking about her future, what she wants and who she wants to be, and whether she can be someone separate from Chuck.”

Chuck Bass, played by Ed Westwick, is the resident bad boy of the Upper East Side in Gossip Girl, and Nate Archibald, played by Chace Crawford is Chuck’s best friend.

Serena, will also be trying it out without a man. Can it be done? “I think that’s her journey,” Savage said. “Can she be defined without a man in her life? It’s sort of a legacy she got from her mom, Lily, and they’ll have a big story that will come to a head around Christmas. It’ll delve into Serena’s relationships, her romantic past and her underlying issues with her mom.”

Tim Gunn, American fashion consultant and television personality will guest-star as himself in an episode to air in late October. The Project Runway guru is sure to bring his quick wit and fashion advice to the show. That should be fun to watch.