First it was the meat bikini, and now Lady Gaga dolled herself up in a meat dress at last night’s MTV VMAs. Lady Gaga’s VMA outfit was pure meat — yes you read that correctly! 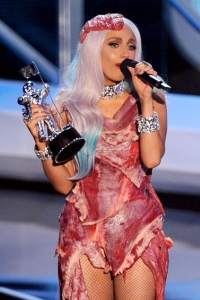 Known for wearing strange-looking dresses on significant occasions, Lady Gaga wore a bloody-looking dress at the 2010 VMAs — with meat hat to match — to accept the award for Video of the Year.

The dress looked more like it belonged in a butcher shop than on a person and covered more of her skin than the meat bikini she had previously worn on the cover of Vogue Hommes Japan.

When Ellen DeGeneres, a vegan, interviewed her last night after the VMAs Gaga said, “It is certainly no disrespect to anyone that is vegan or vegetarian. As you know, I am the most judgment-free human being on the earth. However, it has many interpretations, but for me this evening. If we don’t stand up for what we believe in and if we don’t fight for our rights, pretty soon we’re going to have as much rights as the meat on our own bones.”

The interview will air on Ellen DeGeneres’ season premiere show on September 13 when Ellen presents her with a kale bikini. That should be funny.

PETA has already released a statement including the rhetorical question: “What’s next: The family cat made into a hat?”

Folks, don’t put it past her!