Oprah Winfrey made her mark on Chicago and the world 25 years ago with The Oprah Winfrey Show. Oprah’s final season began with the queen of gab welcoming John Travolta and giving her audience a trip across the world.

The Oprah Winfrey Show has given viewers amazing surprises over the years. Oprah Winfrey has given her most loyal viewers cars, homes and a makeover or two. But the tangible isn’t what made her an icon over the past 25 years. It’s her gift of healing and ability to embrace her followers that makes her the most powerful woman in the world. 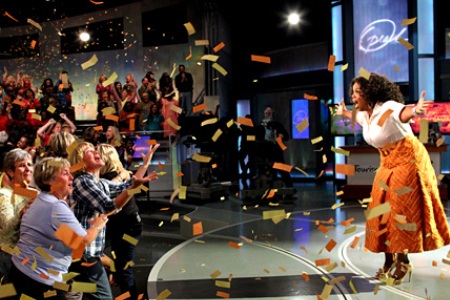 The Oprah Winfrey Show opened the 25th and final season Monday, and while it had flash, it also had heart. The final season is claiming to be all about remembering and celebrating, not just the viewers, but the celebrities who helped Oprah Winfrey in the past and appeared on the show in the beginning.

Oprah Winfrey said from the beginning she didn’t want her staff surprising her in any way. That didn’t stop her minions from giving the first lady of talk a few zingers during the opener. Hush-hush guest, Don Johnson, took Winfrey by surprise after she showed a package from a past season episode devoted to Miami Vice. The former 80’s legend is looking good these days and Oprah Winfrey couldn’t help but agree.

The ambushes didn’t stop there. This time it was for her unsuspecting audience. How do you outdo giving away cars? You put some shrimp on the barbie and hang with some kangaroos. The doors of the stage opened up to reveal a plane and Winfrey told the entire audience they were going to Australia with her. That wasn’t all. John Travolta stepped out of the plane and he’s supposedly going to be their captain. The two have been planning this surprise with Qantas Air — the airline John Travolta flies for — for the past year.

The surprises weren’t just about the famous though. Throughout the show, Oprah Winfrey took a look back at viewers who wrote in and appeared on past shows to see how they were today. She also brought diehard deserving viewers of today to the audience. One really neat surprise was a male Oprah Winfrey fan who watches the show from a blue barber chair and won’t let anyone take away from his Oprah time. She brought him and his chair to the show as a gift. The man was also a huge Jimmy Johnson fan (NASCAR) and got to meet the legendary race car driver.

Oprah Winfrey’s staff couldn’t close her opening show without one more surprise. As Oprah Winfrey was reading her prompter, a few extra words were added. To her shock, she read Paul Simon’s name. The singer was on the talk show host’s tenth season, and returned to help usher in the final season. Paul Simon closed the show with an emotional performance, which helped set the bar for the rest of the farewell season.