When it comes to Jon and Kate Gosselin, you can legally separate them, but you just can’t stop them. Our favorite dysfunctional reality show couple is at it again, spewing their accusations in front of the world on Live with Regis and Kelly. 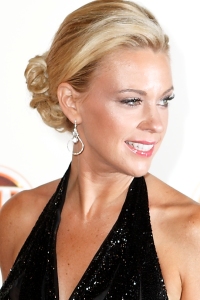 On Live with Regis and Kelly, Kate Gosselin let Kelly Ripa and guest host Anderson Cooper in on a little secret.

Kate Gosselin told Kelly Ripa and Anderson Cooper that tension between her and her ex-husband, Jon Gosselin, still radiates. Really, you don’t say?

“It’s, you know,” Gosselin stammered, “I do try to keep it as peaceful as possible. The level of tension depends on the day.”

Tension isn’t the only thing keeping this family from coexisting and playing nice. Kate Gosselin is claiming the time her brood spends at their dad’s abode is causing friction.

Kate Gosselin admitted, “I basically wait for the phone call from how many of them want to come home.” She wasted no time slinging the mud.

She told Kelly Ripa and Anderson Cooper that Jon Gosselin’s apartment “is not their home. It doesn’t feel like home to them. They want to be at home, in their house.” Kate felt that their true home is the house in Wernersville, Pennsylvania.

Jon Gosselin happened to stumble upon Kate Gosselin’s interview on Live with Regis and Kelly and did what any man would do. He fired up his computer and let her have it via Twitter. “As much as I want to respond to numerous lies recently claimed on Regis and Kelly, I will refrain. I have learned from the past that it’s a waste of my time and energy. I am ‘rising above’ and refuse to engage in any sort of public argument that could potentially harm or upset my children. My children and the people in my life know the truth, and that is what’s important.”

Okay, then. Just because you take the spikes out of the girl and replace them with a weave and dress a man in Ed Hardy doesn’t mean they’ll change. Same old Gosselins, just a different story.