Spencer Pratt was arrested and briefly detained in Costa Rica on weapons charges over the weekend. 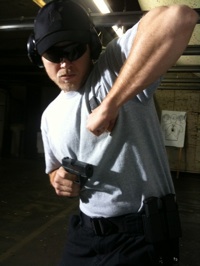 Not one to miss an opportunity to embrace his notoriety, Spencer Pratt notified TMZ of the arrest before the ink on his paperwork was even dry.

“As part of my spiritual cleansing I’ve spent the last week living alone in the jungle, reflecting on my past transgressions, and working to become a better person,” Spencer explained. “I had to live off the land, and hunt to survive. As I departed the country this morning to continue my spiritual journey, I mistakenly brought my hunting weapons to the airport. It was an honest mistake, and they sent me on my way.”

Pratt was booked and processed at a local Costa Rican jail, then later released after signing a confession and turning over his weapons.

Unfortunately, his “spiritual cleansing” didn’t wash away the d-baggery. Pratt’s soon-to-be-ex Heidi Montag has so far remained mum on the incident.

Heidi and Spencer Pratt were in Costa Rica supposedly to exchange custody of the couple’s dogs, a far-fetched idea at best since most people manage to hand off their kids without leaving the country, let alone pets. But as Pratt said in August, “I have nothing in Malibu, I’m homeless, I’m nothing without her.”