Taylor Swift has been known to get even through her lyrics on occasion, just ask Taylor Lautner. So as the 2010 VMAs approach us, we are wondering if she is ready to lash out at him as both are slated to appear at the 2010 MTV Video Music Awards. 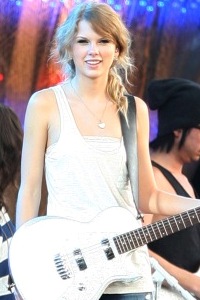 We’re hearing that Taylor Swift concocted a little ditty about the dreadful ambush at last year’s show. A source, reportedly tight with the awards gala, has claimed Swift will debut the new song at the 2010 VMAs Sunday night, which will be aired live on MTV at 9 pm.

The top secret source is blabbing that the song is on the 20-year-old country star’s upcoming album, Speak, and she practiced it Friday at ?a hush hush rehearsal.

Kany?e West has g?arnered a lot of scrutiny for his behavior at last year’??s event and recently took to Twitter to open old wounds?.

The rapper claim??ed he wrote a song for Taylor Swift and would sing it himself if she wouldn’t. The frenemies are both slated t?o?? take the ?2010 Video Music Award?s stage, but in separate performances as well as serve as nominees. Wh?i??le this supposed reliable source is reportedly dishing some dirt, I won’t believe it till I see it. But I can hope? ??for it.

And don’t miss our coverage from the red carpet!?

Read on ??for more Taylor Swift