Ali Fedotowsky gave it all up to find love on The Bachelorette and apparently it’s all paying off. 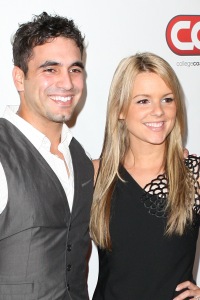 Ali Fedotowsky said goodbye to her job as a Facebook ad executive to fish in The Bachelorette pond of love. Not only did she catch the sexiest fish in the water, but she landed herself a sweet new gig to boot.

Fedotowsky announced her new job via Twitter. She’s going to be on TV again!

“Thrilled to be a part of the Fox 5 San Diego news team! My 1st segment is Monday morning. Love being involved with the community this way,” Ali Fedotowsky tweeted.

If you want to catch the reality show cutie, provided you’re in the viewing area, turn your dial to Fox 5 San Diego at 9 am on Monday, September 13.

It looks like Ali Fedotowsky is slated to be part of a series of segments, but the subject matter isn’t clear right now.

Fedotowsky relocated from San Francisco to San Diego to cozy up with her fiance Roberto Martinez. The couple moved in together recently.

Many diehard fans of The Bachelorette who wanted to see more of Ali Fedotowsky and Roberto Martinez were bummed the couple weren’t included in the eleventh season of Dancing With the Stars.

At least she’s on the news now. Congrats, Ali!