Jessica Simpson is in. The former proud to wear “mom jeans” singer and designer was revealed as the surprise celebrity guest judge for the season finale of Project Runway.

Lifetime has confirmed the reality show news to Access Hollywood. Jessica Simpson is the celebrity guest judge for the season finale of Project Runway. 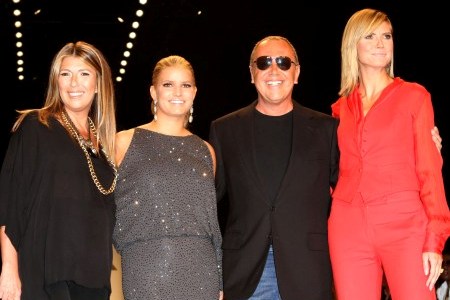 Simpson, as well as Heidi Klum, Nina Garcia and Michael Kors dressed in their finest frocks and suits during Mercedes-Benz Fashion Week Thursday morning. The posse was on hand to judge the final Project Runway contestants’ artistic extravaganzas.

Jessica Simpson is joining the ranks of other style mavens who have popped up as celebrity judges on Project Runway to help Heidi Klum, Nina Garcia and Michael Kors say “Auf Wiedersehen” to contestants. Sarah Jessica Parker and Victoria Beckham are just two in the long line that have brought their passion for fashion to the show.

The excitement of Fashion Week wasn’t the only fashion frenzy Jessica Simpson had on her mind this week. The designer debuted her Spring 2011 “Show Me Your Blues” Jeanswear collection.

Check out the finale of Project Runway Thursday, October 28 to see who was in and who was out according to Jessica Simpson, Heidi Klum, Nina Garcia and Michael Kors.

Read on for more Project Runway