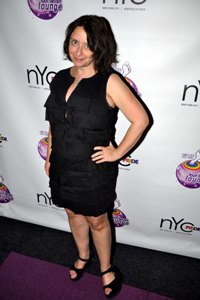 Born in New York City, baby Eli apparently has a “crazy story” behind his conception, but Rachel Dratch isn’t ready to divulge that anecdote just yet, or the name of her baby’s daddy.

The actress told People, “I’ve always been kind of private. So then I’m like, ‘Why do I need to tell people?’ I would want to know but…”

What we do know is that Rachel Dratch, 44, and her first child are doing great, but no word on the usual information that accompanies such an announcement, like the weight or height of said baby.

Aside from becoming a mother, Rachel Dratch has kept busy since leaving Saturday Night Live in 2006.

Dratch has appeared on TV shows Ugly Betty, Wizards of Waverly Place and Sherri, as well as in the movies My Life in Ruins and I Hate Valentine’s Day. However, she did make a guest appearance in 2010 on the show that made her famous when Betty White hosted SNL’s Mother’s Day episode.