Willow Smith is no longer just the daughter of Will Smith. The young fireball is coming into her own with a hot debut album and its first single is setting the bar. 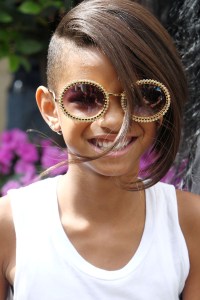 Nine-year-old Willow Smith has lived her young life as the daughter of Will Smith and Jada Pinkett Smith. Most recently she’s been referred to as the kid sister of Jaden Smith, breakout star of the remake of The Karate Kid and Justin Beiber’s new stage pal.

Well, ladies and gentlemen, introducing Willow Smith, the musician. Willow Smith is standing on her own with a sizzling debut single, Whip My Hair.

The first single from her debut album radiates a rap flow lyrically and a funky-pop undertone beat-wise. I think I even heard a synthesized chipmunk sound in there, too. Or, it could be the fact that the girl throwing down is just nine years old. Whatever the case, it’s pretty sick in my opinion — sick in a good way.

Willow Smith doesn’t care what kind of hair you have in her new single. Her infectious lyrics simply request, “All my ladies if you feel it go on and do it. Do it with your hair. Don’t matter if it’s long, short. Whip your hair.”

Willow Smith is serving killer beats with Whip My Hair, but that doesn’t mean everything is set in stone with her debut album. Willow Smith hasn’t decided what to name her breakout endeavor or when it will be dropped. One thing that is certain is the album will be released on Jay-Z’s Roc Nation label.

Those who have followed the rocker through her parents’ success know this poised young girl has an edgy side. She’s been snapped on the red carpet modeling the funkiest of fashion and sporting the highest of Mohawks. The only hope is that the whole album reads as cutting edge as her look.

Will Smith, Jada Pinkett Smith and Jaden Smith must be so proud. Make no mistake, everyone will know Willow Smith’s name.