Never Let Me Go is generating serious Oscar buzz as one of the best films of the year. Those that have seen the film are left speechless with its powerful capturing of a beloved book.

Never Let Me Go is based on the highly acclaimed novel of the same name by Kazuo Ishiguro, who also penned The Remains of the Day. 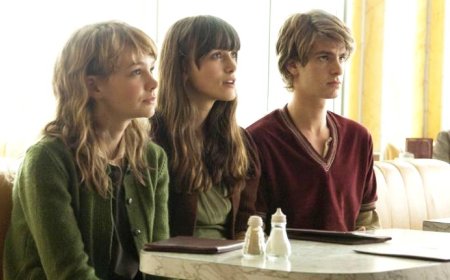 The story centers on love and loss and the unspoken truths that threaten friendships and intimate relationships. Never Let Me Go also asks a powerful question: What makes us human?

Screenwriter Alex Garland and director Mark Romanek (One Hour Photo) have been charged with bringing Ishiguro’s vision to the screen and the results are as powerful as the on-the-page prose.

Never Let Me Go is haunting in its poignancy following the exploits of Kathy (Carey Mulligan), Ruth (Keira Knightley) and Tommy (Andrew Garfield). The friends exist in a world that may seem familiar, but is unlike any audiences have previously seen.

Knightley, Mulligan and Garfield’s characters grew up together as friends at an English boarding school. It is when they graduate from boarding school that they discover the future is not what they expected and they also have no say in molding it.

Like so many upon entering the world after schooling, Kathy, Ruth and Tommy discover bumps in the road to their future that force them to deal with long suppressed emotions including jealousy, betrayal and the most powerful of them all — love.

SheKnows is proud to present an exclusive clip from Never Let Me Go entitled Miss Lucy Questions the Girls!