The much-anticipated Hellcats finally hit the CW last night. Hellcats’ premiere episode tucked fish out of water Marti into her new Cheertown home, while setting up some serious storylines!

Related story Ashley Tisdale on Why Self-care Matters So Much: ‘I Have Never Wanted to Put My Anxiety on My Child' 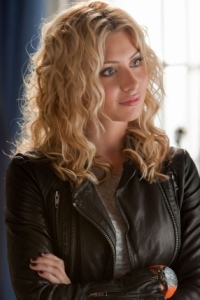 Hellcats kicked off with Marti (Alyson Michalka) and her best pal Dan smirking at the cheer girls. A smart college student from the less glam side of the tracks, Marti’s got serious legal ambitions and a cool girl chip on her shoulder.

Unfortunately, her mother Wanda (Gail O’Grady) doesn’t have it as together as she does and Marti learns very late in the game that her scholarship has been pulled.

As she scrambles to find a way to stay enrolled at Lancer U, she hears that Hellcat Savannah (Ashley Tisdale) has a cheer scholarship. Marti scoffs. Savannah defends. The two girls face off.

After they realize they’re making a scene and sneak out of the admissions office, Marti sees that the Hellcats are holding tryouts. She groans at the realization that the team may be her only chance to stay in school.

Too bad she just butted heads with the captain and then stumbles with the choreography in tryouts. But, instead of throwing in her proverbial pom-pom, Marti lets loose and does her own thing.

Fortunately, Savannah isn’t too proud to admit Marti’s wild style is just what the team needs. It seems the Hellcats are also fighting to stay in the game. They will lose their funding and scholarships if they can’t win this year’s championship.

Hellcats: Beyond the kickoff

While the premiere was saddled with the task of setting up a somewhat familiar story, it was a cheertastic good time with some great lines. It brought the CW decent ratings, while also making strides in teasing what’s to come and why to keep tuning in.

As Marti and Savannah quickly transitioned from rivals to roommates and potential BFFs, Marti revealed where she got her moves, as well as her Achilles’ heel.

Her rise as a young up and coming gymnast crashed after her drunken mother threw up on her in front of everyone. Marti tried to brave it out, but her mother kept coming to meets. Unable to focus under the weight of her embarrassment, she finally quit.

Villainous Alice set up quite a cliffhanger after overhearing that tale! Upset that Marti has taken her place, she invited Wanda to her daughter’s first big event. 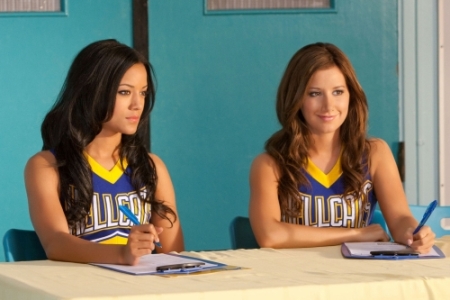 Alice also helped set up some triangle action for Marti when she stole the new girl’s towel after practice. The indecent exposure pushed Marti into a moment with her Hellcats base, Lewis. Alice won’t like that, and neither will Marti’s townie pal Dan, who clearly has feelings for her.

What we haven’t seen yet is the background drama Savannah brings to the table, so SheKnows is going to give you a little tease.

This peppy, team player has serious roots in cheerleading, but has been shunned by her religious family for transferring out of the school where her sister is cheer captain. With Savannah hoping to make a name for herself at Lancer, it’s not clear yet how her family drama will play out, but it should be interesting.

Hellcats airs Wednesday nights on the CW at 9 pm and is one of the fall TV shows to watch this season!