It’s official: After months of speculation over who would be named as Larry King’s replacement, with Ryan Seacrest, Oprah Winfrey, Anderson Cooper and Katie Couric among the leading contenders, it was announced that, as of January, the post will be filled by British television host Piers Morgan. 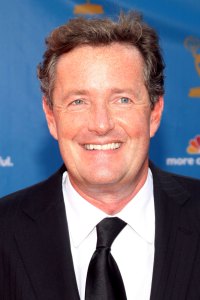 CNN said on Wednesday that Morgan, 45, a former British tabloid newspaper editor and current judge on America’s Got Talent, will take over for the King of Suspenders when Larry King retires from Larry King Live after a 25-year run.

In response to the news, Morgan told The Hollywood Reporter he plans to bring “journalistic rigor” to the job and that he’d like one of his first interviews to be Barack Obama, followed by “Mel Gibson or Lindsay Lohan or whoever is in the news who is relevant and current.”

Way to keep up that rigor, Piers. From Obama to Loca Lohan? You can see the influence of his tabloid past.

They have yet to unveil a title for the new CNN show, which will air weekdays at 9 pm, but it’s being billed as a “candid, in-depth newsmaker interview program” based in New York with Morgan also working from London and Los Angeles.

Morgan will reportedly keep his day job as the Simon Cowell of America’s Got Talent but he is expected to leave his four-year long judging stint on the original UK version of the show, aptly titled Britain’s Got Talent.

While taking over for 76-year-old King is prestigious, Morgan has some serious trials ahead of him. Larry King Live has lost about half of its audience since 2008 while cable rivals MSNBC and Fox News have gained viewers in recent years.

“I want this to be the most credible and popular interview program in the world,” Morgan said. “I want to create headlines and get ratings up — particularly in America. I’d like to get CNN back to number one. Everything else I’ve done on television has been number one.”

Larry King’s last show is expected to air in mid-December.