The Vampire Diaries is back! We’ve waited all summer long, getting our fill with reruns, but the wait is over. The CW’s Vampire Diaries gets set to reclaim Thursday nights. 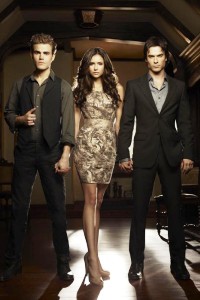 When we last left the brooding Salvatore brothers, Stefan and Damon (Paul Wesley and Ian Somerhalder), and damsel in distress Elena (Nina Dobrev), all hell was about to break loose. Katherine showed her face, Uncle John fell prey, and Elena’s brother Jeremy was about to become immortal — maybe.

The Vampire Diaries’ season one story arc of finding the brothers’ long-lost vampire love, Katherine, came to a boiling point on her doppelganger Elena’s porch.

An unsuspecting Damon, came face-to-face and lip-to-lip with the manipulative Katherine thinking it was Elena. Damon thought he was acting on pent-up feelings and passion between him and Elena, which caused a steamy kiss. Surprise Damon, it wasn’t Elena you were locking lips with — it was Katherine.

Katherine unleashed terror on Elena’s Uncle John, making mincemeat out of the man, while viewers watched Elena’s brother Jeremy try to off himself and drink the vampire blood of his true love, Anna.

Phew, that’s a lot of drama, even for The Vampire Diaries!

So, what does the cast think of Katherine’s return? For Nina Dobrev, playing double duty portraying Katherine and Elena comes from a special place. “It shows in the eyes, but before you get to the eyes, you’ve got to think differently. I’m not thinking the same things when I play Elena when I play Katherine. There’s a way that I carry myself when I put high heels on that I don’t when I’m in Converse,” the actress said in a recent interview. 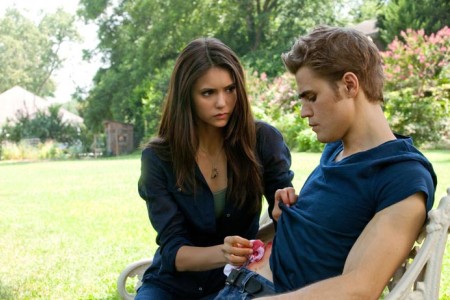 Season two promises to be explosive, but what does Katherine have in store for the town of Mystic Falls? You can never tell on The Vampire Diaries, but Nina Dobrev gives some insight.

“Why not go back into town and mess with your ex-boyfriend, or in this case, two of them?” Dobrev explained. “She’s not going to give it all up and nor does she need to because she calls the shots. Everyone is and should be very scared of her.”

Hell hath no fury like a woman scorned. I’m scared already! Check out The Vampire Diaries season two preview clip and the premiere on the CW September 9.