Katie Holmes is revealing her greatest appreciation for Jacqueline Kennedy Onassis is the hand the icon took in raising her children. It is something Katie Holmes and husband Tom Cruise are all too familiar with when it comes to daughter Suri Cruise. 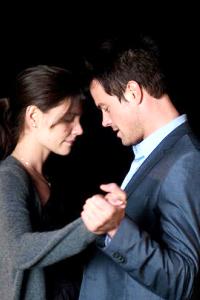 At a recent press junket for her new movie, The Romantics, Katie Holmes told Access Hollywood that Jacqueline Kennedy Onassis “was an amazing mother and she was a very strong woman.”

Holmes added, “She did a lot right.”

Katie Holmes recently channeled her own Jackie O alter ego while filming the History Channel series, The Kennedys, opposite Greg Kinnear who tackles the role of John F Kennedy.

For Katie Holmes, not even being married to the famous Tom Cruise could prepare her to play such a challenging figure and wife in American history. Stepping into the role of Jacqueline Kennedy Onassis was something the actress found intimidating.

“It’s been amazing and a little overwhelming because she is such an icon and so important to our country and so many people have fun memories of her,” Holmes said at the junket for The Romantics. 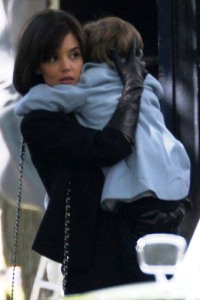 Holmes explained, “In doing the research, I learned so much about her and my adoration for her only grew, so it’s been really fun. It’s always great to play a character that you love.”

Of course Katie Holmes couldn’t be away from adorable daughter, Suri Cruise, for too long. The tiny tot and mini fashionista was a regular on the set of The Kennedys.

“It’s been really wonderful and I love being a mom,” Katie Holmes told Access Hollywood of Suri Cruise. “Suri comes to the set with me. She is amazing and it’s really fun to share making a movie with her. She brings so much to it.”

According to mom, little Suri Cruise is a breath of fresh air.

“She is such a light that you instantly feel better,” Holmes said. “When I’m working, I feel like, ‘Wow, this is so magical I get to share this with you, and you give me so much.’ It’s really fun.”

You can see Mrs Tom Cruise when The Romantics hits theaters on September 10.