Like a heart-stopping, sexy, pillowy-lipped Mother Teresa, Angelina Jolie is at it again.

Not only is Angelina Jolie a superstar, an Academy Award-winning actress, practically married to Brad Pitt, a mother of six, savior of orphans and one of the most beautiful beings to ever grace the planet, but she’s also a devoted humanitarian. Damn! She’s making the rest of us look bad. 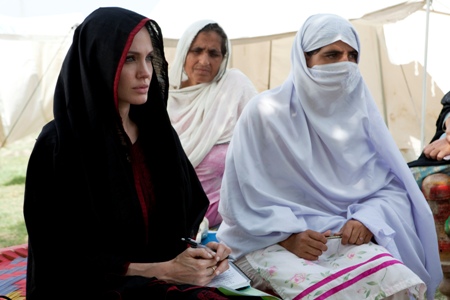 On the heels of last month’s massive flood in the northwest of Pakistan, Jolie flew to the country and met with Afghan refugees whose camp near the town of Nowshera was completely destroyed. Angelina Jolie surveyed the damage while bringing awareness to the issue.

The actress said she was shocked by the level of destruction wrought in the three hours of flooding. “From what I understand, the situation is on a scale we have not really seen. It’s on a huge scale,” she said during Tuesday’s visit. “It’s not just the floods — it’s three decades that the Pakistani people have hosted Afghan refugees. Their needs need to be addressed. There are people displaced by the floods, all their homes washed away. Many of them lost their children during the floods.”

Over 21 million people have been affected by more than five weeks of flooding and aid workers are battling to maintain a supply of food, medicine and drinking water to victims.

This trip marks Angelina Jolie’s fourth visit to Pakistan since becoming a goodwill ambassador for the UN in 2001. Not one to settle for just being a mouth piece for a cause (though hers is a lovely mouth), last month it was reported that the 35-year-old had personally donated $100,000 to the Pakistani flood victims, almost twice as much as the country’s own president donated.

So far, the UN has raised less than two thirds of the necessary $460 million in aid needed for the flood response and donations have moved to a trickle, hence Jolie’s efforts to return awareness to the plight of these people.

Maurizio Giuliano, a UN spokesman, said he hoped Angelina’s presence would remind people that millions of lives are still at stake and that help is desperately needed. “If we don’t raise the money then people will die. It’s as simple as that,” he said.