For the second time in five months, rumors are cropping up that Matt and Amy Roloff, stars of the TLC series Little People, Big World, are getting divorced. 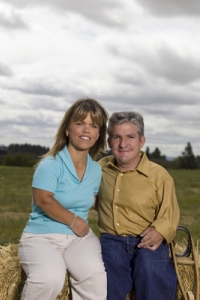 In May, news of Matt and Amy Roloff having split burned up the blogosphere, only to be squelched by the pair.

Now new sources are saying the Roloffs are divorcing, while other more reliable sources have confirmed that they are not. Only time will tell if the couple is actually on the rocks, but there’s only one thing that is definitely dunzo and that’s their TLC show.

Mere coincidence? We think not.

This isn’t the first time the Roloff family has been in the headlines.

In 2007, Matt was arrested on DUI charges. While found not guilty, his driver’s license was suspended for three years due to a previous drunken-driving diversion program that he completed in 2003. Also, following the May reports of their divorce, word that Matt had suffered a massive heart attack and had passed away spread off over the internet and eventually, thankfully, proved to be false.