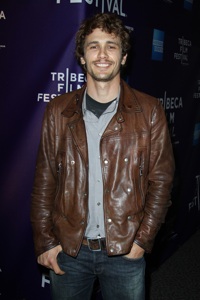 Turns out James Franco is a very hands-on kind of guy.

The actor is currently promoting 127 Hours at film festivals. The flick is a true life story about Aron Ralston, a mountaineer who was forced to cut off his own arm after getting stuck under a boulder and having no chance of rescue — or any other way out.

There’s a really strange scene in the flick where Aron tries to distract himself from his calamitous circumstances by playing a little game of tickle the pickle. When asked about it, Franco says Aron never confirmed or denied if this part of the story was true or a pervy figment of a writer’s imagination.

But far be it from James Franco to pass up an opportunity to talk about his own masturbatory habits. He proceeded on a long and unnecessary answer about his own proclivities — and wow, is he busy.

“I spend a fair amount of time alone,” Franco said, “especially when I travel — maybe to something like this or for work or whatever — but I’m in hotels a lot for a lot of my life. And I don’t mind it because I have a lot of stuff to do on my own. I have a lot of reading to do for school or whatever. You asked! So, when I’m alone, I do masturbate a lot. I don’t know why. It’s like you have those days where it’s just like, I have a ton of writing to do, or a ton of reading to do, and you’re just like, OK, I’m going to be on the couch all day or in bed all day just doing that, four or five times a day. So, I probably would have if I was stuck under a rock.”

Four or five times a day? If he even brought it down (LOL) to twice a day, can you imagine what he could do with all that extra free time? He could write a book! Film two extra movies a year! Volunteer at a school for the blind! Do some chest presses (he’s looking a bit skinny).

Of course, he’s probably single-handedly (LOL) keeping the Kleenex and Vaseline brands in business, so maybe we should give him a hand (LOL) for doing his part to boost the economy.