With Wyclef Jean out of the running for president of Haiti, why is the former Fugees star still going on the defense against Sean Penn? It’s personal. 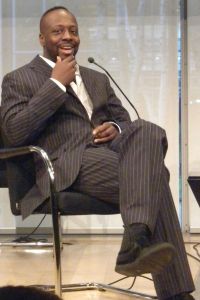 Sean Penn allegedly slammed Wyclef Jean for being a “non-presence” in the earthquake-devastated nation of Haiti — an accusation the Haitian-born activist is not taking lightly.

During a recent concert, Wyclef Jean allegedly threw a little dirt of his own on the actor.

“I got a message for Sean Penn: Maybe he ain’t see me in Haiti because he was too busy sniffing cocaine,” Jean accused.

You can’t throw shade at Sean Penn and expect him to take it. His rep quickly volleyed back with his own statement.

“Mr Jean is clearly unfamiliar with the physical demands put upon volunteers in Haiti. As aid workers there, the notion of depleting the body’s immune system thru the use of illicit drugs is ludicrous. That Mr Jean would make such a false accusation is reckless and saddening, but not surprising.”

Wyclef Jean made it clear he wanted to run for president of Haiti, but he was listed as ineligible due to residency requirements. The race for president will be held during the November 28, 2010 election.

He might have been locked out this time, but Wyclef Jean is not giving up. “I’ll never quit,” he told Newsweek of the decision. “I’ll run in another five years.”

Hopefully this feud with Wyclef Jean and Sean Penn won’t last another five years. That would be ridiculous.