Danielle Staub loves to say “buh-bye” and now she’s doing it again. Staub made it through the lion’s den on The Real Housewives of New Jersey, but the reality star won’t be back for another season of Bravo’s hit reality show. 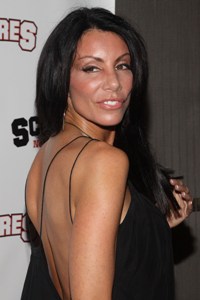 Things seemed a little awkward during Monday night’s Real Housewives of New Jersey reunion (part two) when Danielle Staub hugged it out with her nemeses Teresa Giudice and Jacqueline Laurita (Staub and Caroline Manzo only shook hands) and Bravo is shedding some light on the situation.

She has been part of the world’s most famous table flipping scene, sued a teenager and crashed a party or two. Now, she’s taking her final bow according to Bravo. After part two of The Real Housewives of New Jersey reunion special, Bravo confirmed Danielle Staub is leaving the cast.

Andy Cohen took to his blog to break the news. “The reunion was Danielle’s last appearance,” wrote Andy Cohen in a post after the tension-filled reunion. The night was full of surprises as Danielle Staub continued to fuel the fire with Teresa Giudice, Caroline Manzo and Jacqueline Laurita.

So, why the hugs that came out of left field? They were the perfect twist to a dramatic exit by Danielle Staub. “We thought the hugs were a great way to end two seasons of bitterness between the women,” Andy Cohen blogged.

Danielle Staub was also reportedly the reason behind Dina Manzo’s early departure from the show. “I would say 99.9 percent is because of Danielle Staub, but the other .1 percent was drama created by her,” she told Us Weekly back in June.

Staub, 48, recently released her memoir, The Naked Truth. She also debuted a single with Lori Michaels called Real Close. The duo is rumored to be having a lesbian love affair and a telling statement by Staub at the reunion might bring us closer to the truth.

After being attacked by the ladies for dabbling in the married men pool, Danielle Staub fired back saying, “I definitely don’t sleep with men.”

Who did she tell the ladies to ask for confirmation? Lori Michaels, of course. I’m going to miss that Jersey girl.

Check out the hugs seen around the world and tell SheKnows if you think it’s real or real awkward.