Nothing says drama like Kanye West storming the stage and stealing the spotlight from Taylor Swift accepting the 2009 MTV Video Music Award for Best Female Video. It’s one year later and West is feeling the heat. 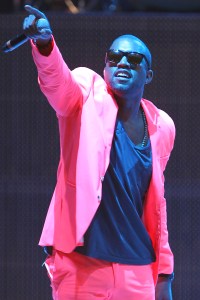 At last year’s 2009 MTV Video Music Awards, Kanye West took one of Taylor Swift’s biggest moments and stomped on it. The self-entitled rapper criticized the decision to give Swift the Best Female Video award, raging on stage that Beyonce deserved the top prize.

The sneak attack on Taylor Swift was a faux pas Kanye West admits was not one of his finest moments. So much in fact, he wrote a song for Swift to apologize. Better late than never, right?

“I wrote a song for Taylor Swift that’s so beautiful and I want her to have it. If she won’t take it then I’ll perform it for her. She had nothing to do with my issues with award shows. She had no idea what hit her,” Kanye West wrote in a block of tweets explaining his actions.

“She’s just a lil girl with dreams like the rest of us. She deserves the apology more than anyone. I’m ready to get out of my own way. The ego is overdone,” he added. “Who am I to run on stage? I would never ever again in a million years do that. Sorry to let you down. TAYLOR LOVES RAP MUSIC, I LOVE COUNTRY MUSIC. I’m sorry Taylor.”

The serial award crasher still claims he’s not a villain. “I am not a bad person. Even in that moment I was only trying to do good but people don’t always need my help. Beyonce didn’t need that. MTV didn’t need that and Taylor and her family, friends and fans definitely didn’t want or need that.”

Kanye West also took the time to address the haters he’s spent the last year trying to regain the respect of.

“There are people who don’t dislike me…they absolutely hate me!” he tweeted. “If you google ‘Asshole’ my face may very well pop up 2 pages into the search. People tweeted that they wish I was dead. They wanted me to die people. I carry that…I wear my scars.”

Make no mistake Kanye West doubters, this superstar bleeds through and through for the actions that ultimately cost him a back-step in his career. “How deep is the scar… I bled hard.. cancelled tour with the number one pop star in the world Lady Gaga… closed the doors of my clothing office,” West tweeted. “Had to let employees go… for the first time I felt the impact of my brash actions … I felt the recession from an ownership side.”

Viewers who watched the distasteful act of defiance Kanye West showed during Taylor Swift’s acceptance speech might have thought Swift was a target, but West wants the public to understand his rant wasn’t just about Swift. It didn’t matter who won. As long as it wasn’t Beyonce, the offender was going to get a piece of the rapper’s mind.

West went on to explain that he was seeking justice for who he felt should have won and he felt that way long before Swift set foot on the VMA stage.

Kanye West reasoned that had he been present at the Grammy Awards when Justin Timberlake was nominated for his 2006 album, FutureSex/LoveSounds, he would have staged the same attack — for justice.

“I watched Justin Timberlake at the Grammys lose every televised award including album of the year which the Dixie Chicks won,” he tweeted. “I would have ran on stage for Justin that night because Sexy Back, in my mind, was that important…that impactful to our culture.”

Kanye West, seeking celebrity justice, you can count on him. Seriously? We get the idea and the apology is great, but you’re not the Robin Hood of music.

Apology accepted or not, Kanye West will reportedly try to redeem himself at the 2010 MTV Video Music Awards. Watch the comeback kid September 12 at 9 pm.