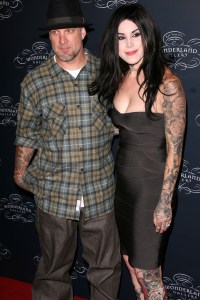 At the opening of her Wonderland gallery in West Hollywood, the reality starlet told Access Hollywood, “It’s pretty obvious that we’re dating.”

Kat Von D is taking baby steps in the new relationship with Jesse James. “It’s actually very new. Although, I’ve known Jesse for a long time, since I was 22 years old,” she told Access Hollywood. “We’ve been friends forever and this is definitely something that I think we weren’t expecting, and it’s been great.”

When Access Hollywood went for the jugular, trying to get the dirt on whether the romance was more than just a fling, Kat Von D was all too happy to confirm the news. “Are you asking me if we are a couple? It is confirmed, yes,” she said.

Being with the man who broke Sandra Bullock’s heart can’t be easy for Kat Von D’s public life. The TLC personality is hoping the allure of their relationship vanishes. “I think that it’s just a shame that people are interested in something that’s not so important to them,” she said. “I think there’s a lot more positive things we could focus on and I urge everybody not to buy tabloids and watch TV, but that’s just me.”

The gallery opening for the tattoo artist also provided a personal opportunity for the couple. Allegedly, Access Hollywood caught a glimpse of Jesse James meeting his girlfriend’s dad.

Jesse James and Sandra Bullock’s divorce was finalized in June after his admitted infidelity.