Ali Larter has been mum on the sex of her unborn child, but did a slip while promoting her new movie give it away? 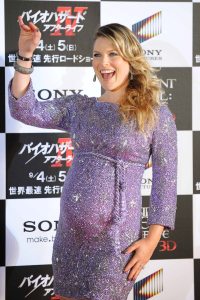 If the “whoops I said that” from Ali Larter is true, the actress should be having a baby boy.

Ali Larter was recently promoting her new movie, Resident Evil: Afterlife 3D, to Fox News when she noticeably might have given a clue to her baby’s gender. See if you can catch it.

“I’m not a gamer. I’m not someone who can sit at the computer and figure out these games. It takes a different kind of genius to get to the different levels and get through the different doors,” Larter said in the interview.

The mommy-to-be then motioned to her cute little bump saying, “Possible gamer? Well, after watching these movies and hearing all the gunfire I don’t know what he’s — it’s — going to turn out like.”

So, did the actress who is due in the winter, let the world in on her big secret? Is it possible Ali Larter just randomly said “he’s” or is it possible it was instinctual? I guess we’ll all have to wait and see when the bundle of joy makes his — its — appearance in the cold of the winter.

Being pregnant has been a surreal experience for Larter but she also told Fox News it’s not easy. “I’m just super pregnant. Each moment I want to take off another piece of clothing.”

Ali Larter, who is married to Hayes MacArthur, made the blessed announced she was with child earlier in the summer.