Lady Gaga was in a New York state of mind, posing as one of America’s most iconic symbols for V magazine — Lady Liberty. 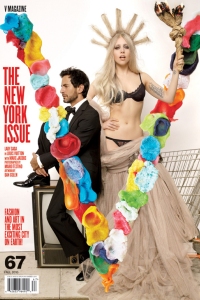 Lady Gaga, whose real name is Stefani Germanotta, hails from the land of the Big Apple. When V magazine began conceptualizing the photo shoot for their New York issue, putting the superstar’s dramatic and edgy stamp on her hometown’s most treasured symbol was a no-brainer.

In true Lady Gaga and New York style, the singer proudly holds a burning paper torch to finish off her twisted version of freedom’s most noted character.

Lady Gaga’s efforts to influence her little monsters’ freedom of expression is imminent. She has become an icon in her own right, so V magazine put the pieces of the puzzle together, pairing two national tokens together.

“Just as the Statue of Liberty was France’s gift to America, Gaga is, to us, New York’s greatest gift to pop culture and fashion…she has become a bona fide genius and we can safely declare her our muse,” said V editor Stephen Gan.

Check out Lady Gaga striking a provocative pose as the Statue of Liberty and tell SheKnows what you think.