Nanette Burstein picked quite a film for her feature film debut — Going the Distance, the raucous movie that stars Drew Barrymore in her first foray into R-rated comedy.

Going the Distance is meant to be side-splitting funny. Directing a cast with that kind of edict can be a challenge for any director. So, how did the creative force behind the acclaimed The Kid Stays in the Picture handle the gig of directing Drew Barrymore, Justin Long, Christina Applegate, Jason Sudeikis and Charlie Smith in the fall’s first romantic comedy? 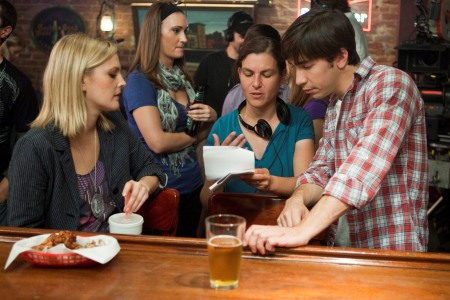 SheKnows: The dialogue in Going the Distance is just so real. When you first got the script, were you just thrilled at the words on the page?

Nanette Burstein: I was excited. I knew going in that it would be an R-rated film, that meant tonally you don’t have to censor yourself. We also did a lot of improvisation. We would shoot the script and then we would improvise every scene. I think that added to the honesty and the comedy of it.

SheKnows: Sometimes performers that are, or were a couple, can work well or not work well on the screen. Drew and Justin, what did you make of their chemistry?

Nanette Burstein: They have such chemistry. [Laughs] You just thank your lucky stars. It’s a romantic movie and the worst thing in romantic films is when that doesn’t happen. They were the opposite. They were a couple that you so enjoy watching. They take pleasure from each other’s company. Also, they have this intimacy. It comes in the slightest detail of body language that you can’t fake. It’s hard to manufacture. It was a huge asset that they were so close. 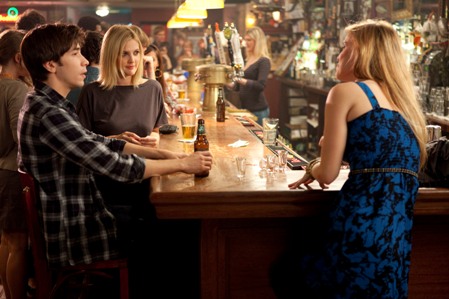 SheKnows: You now have made the move from documentaries to feature films, was there any kind of challenge for you? Regardless of what you’re doing, you’re telling a story.

Nanette Burstein: Right. Exactly. I’ve been trying to tell stories for hopefully [laughs] years. It’s just another way of doing it. It’s very different, but you’re ultimately trying to achieve the exact same thing. What I really appreciated about making narrative films is how much control you can have, which on a documentary there’s the pleasure of discovery and surprise. It’s very hard for a filmmaker of scripted movies, because there is only so much you can control.

This Kid Stays in the Picture!

Nanette Burstein: [The 1970s] is my favorite decade of movies, and a lot of my favorite movies come from that era. A lot of them Robert Evans was involved in. So, I was excited to do this project because he had a great joy of film, but this is the thing that wowed me and influenced me the most to this day: I got to study Robert Evans very intensely, learn the business from Robert Evans, something that most people do not ever get a chance to do in their lives. Here’s a guy who understands the business better than anyone. I had a first-hand, ringside seat hearing about it. 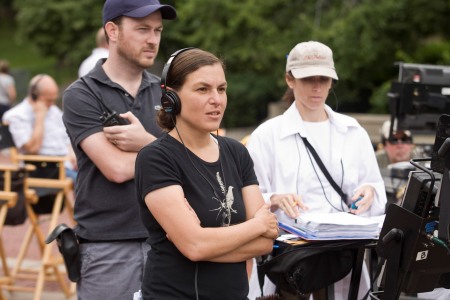 SheKnows: What also struck me about Going the Distance is it was essentially a tale of two cities. New York and San Francisco are almost their own characters, was that a unique challenge or did you shoot in one place and make it look like the other?

Nanette Burstein: We shot a lot of the film in New York City for budget reasons. We shot all the exteriors in California. Even if we shot interiors in New York, we would light it differently and dress it differently. You still get the sense of each of these places. Of course, with the exteriors, there are all these iconic images of these two cities and the bridges, I really took advantage of that.

Nanette Burstein: Christina is a really smart comedic actress. She did improvise, but she picks certain brilliant moments for improvising. It can be different each take. But, she doesn’t go off for ten minutes. She picks a couple of moments, such funny smart things, that you immediately think as a director, “Oh, this is so going in the movie!” [Laughs] The ratio of what she does versus what goes into the cut is very high. She’s so funny. She thinks about, “What would work brilliantly for this scene and what would my character do?” She thinks about the whole picture. I think she is somewhat underrated given her level of talent.

SheKnows: There are a lot of parents who will come out of the movie with a new word for calming their kids down, thanks to Christina Applegate’s stare down and emitting, “Statue!”

SheKnows: Now, lastly, what about Drew? She’s made her own movies as a director, producer and, of course, star. I feel like you almost didn’t just have a lead actress, you had a creative partner.

Nanette Burstein: Yeah, Drew’s level of experience in understanding the process is a huge asset. But, she’s also respectful of the role. She’s not trying to produce and direct the movie. She knows she’s here as an actress. But, she is incredibly insightful. We share a very good relationship. I made it very clear from the beginning I wanted to hear her opinions on everything.

Read on for more Going the Distance