It’s been a while since Katie Holmes did any major acting, outside of pretending she’s happily married to Tom Cruise. But now, Holmes is back in a new film called The Romantics, set for release September 10. 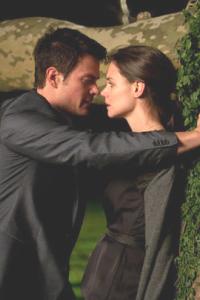 In the vein of The Big Chill, Myth of Fingerprints and Rachel Getting Married, The Romantics sports an all-star cast beyond Katie Holmes, who recently shot a J Crew ad campaign in conjunction with the film.

The Romantics is one of fall’s most anticipated films and stars include Holmes, Josh Duhamel, True Blood star Anna Paquin, Glee’s Dianna Agron, teen heartthrob has-been Adam Brody, Malin Akerman (27 Dresses, Watchmen) and Elijah Wood as a posse of waspy ivy-league graduates nicknamed “The Romantics” thanks to all of their incestuous romantic entanglements.

The group is reunited at a Maine country house ten years after graduation for the wedding of two of their friends (Paquin and Duhamel). Holmes plays Laura, the maid of honor to her best friend, Lila (Paquin), who also just so happened to have dated the groom — Tom (Duhamel) — for four years previously.

At one point, Wood drunkenly asks Holmes how hard it is to watch the love of her life marry the bane of her existence. Presumably, the film follows those difficulties.

Adapted and directed by Galt Niederhoffer, based on her own novel, the film premiered at Sundance earlier this year to modestly complimentary reviews. Most reviewers primarily pointed out the film’s predictable course and tip of the hat to 1980s greats The Big Chill and St Elmo’s Fire, which seem to have been major influences on Niederhoffer.