Steve Carell’s impending exit from The Office had fans wondering how the show could possibly go on without Michael Scott at the helm. The answer, it seems, may just be Hollywood’s veteran tough guy Harvey Keitel! 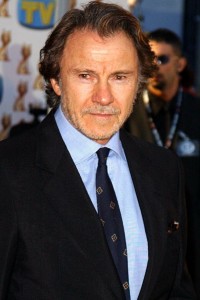 “He’s probably the only guy who can do it,” The Office exec producer Paul Lieberstein told E! online. “Harvey would do a great job — a very different energy. And we don’t want to bring in another Michael, having someone play a very similar character, because we have such a high regard for Steve.”

Keitel recently took to the small screen in the short-lived but critically praised Life on Mars. His character, Lieutenant Hunt, exhibited Keitel’s signature tough guy facade, but there was also a touch of something extra and it seems Lieberstein was paying attention.

“I saw him in Life on Mars and I saw a lot more comedy in his work, just little slivers of it, little things he would do that made me think he’s capable of a lot more,” said Lieberstein. Lieberstein hasn’t officially made any offers or even talked to Keitel’s people, but he’s already getting the character flushed out.

“He’s an old salesman who thought he could retire,” Lieberstein teased. “The stock market went down and he has to come out of retirement to work for a few years.”

Keitel actually has some laughs in the can. He’s in the newest installment of Meet the Parents with Robert DeNiro, Ben Stiller, Dustin Hoffman and Owen Wilson. Entitled Little Fockers, the film is about the pending arrival of the newest member of the Focker-Byrnes clan and is due to hit theaters December 22.

The veteran character actor also has a few projects due to hit theaters next year, including the mafia flick The Last Godfather, the Nazi-era murder story So I Say with Gerard Depardieu and the 1890s survival thriller Cut Throats Nine.

Now that Lieberstein has voiced his hopes, we’ll have to wait to see how Keitel responds to replacing Steve Carell. What do you think: Is Harvey Keitel the man to assume control of The Office?