Killers stars Ashton Kutcher in the role that will hopefully get him taken seriously as an action star. The film also features Katherine Heigl as the wife of Kutcher’s character who is in for a surprise when she discovers her husband is a CIA hit man.

We’ve got an exclusive clip from Killers and asked the stars about what first drew them to the film. “I’ve obviously been doing a few romantic comedies, and what I loved about this particular one was that it had the added element of action, so it was a slightly different take on the formula,” Katherine Heigl said of why she chose Killers as her next film. 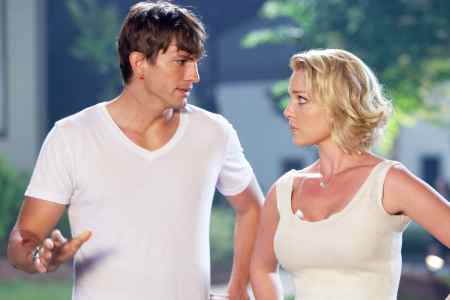 “Although I love the formula and I will continue, hopefully, until I’m too old to do romantic comedies, this just had an energy and this thing that made it unique. I loved being the broad character to Ashton’s straight guy. It was really fun to not be the straight guy, for a change, and Ashton made it really fun and easy to do that. When I saw the movie, I was very entertained, and that’s hard to do when you’re in it because that takes you out of it. With this movie, I just had such a good time watching it and thought, ‘That’s exactly what we were going for.’ I love it!”

Kutcher saw the film as a chance to have casting directors allow him to broaden his range. “When I read the script, I had been looking for a movie like this, that was a two-hander and that was a fun, entertaining action-comedy. I thought I was going to find it in a buddy cop movie with two guys. And then, when I read this script, I realized that this kind of movie hadn’t been made in a while and I felt like we could have a really good time doing it and make a really entertaining film,” Kutcher said. “My character in the film is a guy who starts out in this extraordinary place with this extraordinary profession. When he meets the right person, he decides that he just wants a normal life, and it’s a life that he doesn’t necessarily get to have. For me, I found that I was connected to that.”

Now, will Killers give Ashton Kutcher the opportunity to portray more action heroes? From the sound of it, he sure hopes that will be the case, even if he’s not Tom Cruise and doesn’t do all his own stunts.

“I do have a stunt person. I’m not as awesome as Tom Cruise [laughs]. I don’t jump through glass. I didn’t participate in that. My stunt guy went to the hospital twice, for jumping through glass. I did jump off a boat and I did most of the fight stuff. I bought one of those exercise DVDs off the TV. I put it in and watched it, and got in shape. I did some fight training. I learned Krav Maga, Muay Thai and Kali, which is Filipino knife fighting. And then, I realized that I should have learned how to movie fight because on the first fight scene, I knocked out a stunt guy.”

Killers also allowed us the opportunity to ask Katherine Heigl what her life is like now. After the Grey’s Anatomy TV spotlight faded, she welcomed a child into her life with husband Josh Kelley and moved to Utah — away from the blinding Hollywood lights.

“In my career, I’m very grateful for the opportunities. It’s a crazy feeling, and I feel very fortunate. I can’t stop trying to take them all. It’s awesome. In my life, I’m very, very grateful for my family and for my friends. Over the past couple of years, I’ve found nothing more grounding, safe and constant than my friends and family, and I’m very grateful to be a mom (to adopted daughter Nancy Leigh). It’s changed my whole perspective, in a very good way. There’s a lot to be grateful for.”

In our exclusive clip, Ashton talks about how his Killers co-stars Catherine O’Hara and Tom Selleck provided the inspiration for capturing movie marriage for both him and Katherine Heigl.