Conan O’Brien is finally releasing the name of his new TBS show and it’s pretty simple. 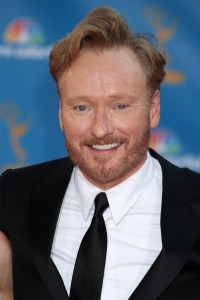 Did Conan O’Brien choose his famous new nickname, Coco, for the name of his new TBS show? Or did he go with a late night stunner to grab his viewers’ attention? The answer is neither. The former NBC late night funnyman simply chose, Conan.

“Simple, pure, like the man himself,” Conan O’Brien said of the name in a video announcement on his YouTube page.

Conan O’Brien inked a deal with TBS back in April after the comedian decided not to continue fronting NBC’s The Tonight Show, after a short seven months. O’Brien took a stand after NBC decided to move Jay Leno back to the time slot occupied by O’Brien’s show.

To gear up for Conan O’Brien’s Conan, TBS has been airing a series of promos, but it’s O’Brien’s YouTube page and website, TeamCoco.com, that will likely help draw former and new fans to the series.

Conan is slated to air weekly, Monday through Thursday. Check out the premiere on November 8 at 11 pm.