Michael Douglas was diagnosed with throat cancer but that doesn’t mean the legendary actor is giving up without a fight.

Michael Douglas reportedly told People magazine he is optimistic and “expects to make a full recovery.” The 65-year-old icon and husband of Catherine Zeta-Jones was diagnosed with throat cancer after a walnut-sized tumor was discovered on his tongue. 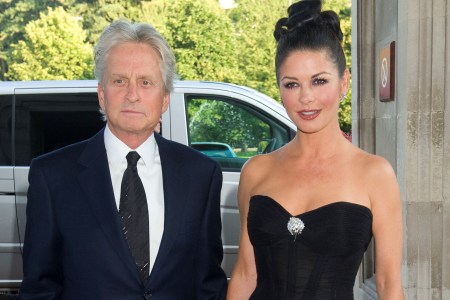 When the news first broke in early August, 2010, it was reported Michael Douglas would undergo an eight-week round of radiation and chemotherapy in New York. With his current treatment being administered his doctors are reportedly happy with the progress and say the cancer has not spread.

Catherine Zeta-Jones opened up about the most difficult part of dealing with her husband’s diagnosis. The actress said it’s tough seeing Douglas fatigued “because Michael is never tired.” Zeta-Jones explained she was livid that doctors didn’t detect the tumor earlier after months of Douglas dealing with throat and ear pain.

“Without having to blame anybody, these things sometimes just don’t show up,” Douglas reasoned.

Michael Douglas and Catherine Zeta-Jones are staying positive about his recovery as the couple stay strong for their two children, Dylan, 10, and Carys, 7.

Read on for more Michael Douglas