Lindsay Lohan opens up about her father and her poor choices in the October issue of Vanity Fair. 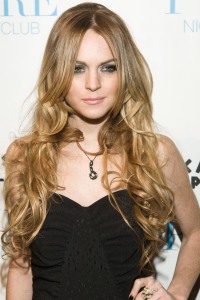 Before going to jail and rehab, Lindsay Lohan sat down with Vanity Fair where she admitted, “I was irresponsible. And I’m not making excuses.”

The troubled actress explained how she looked to the tabloids for role models. “I would look up to those girls, you know, the Britney Spears of the world and whatever. And I would be like, I want to be like that.”

Lindsay Lohan now realizes her days of clubbing and excess led her down the wrong path, but told the magazine her party girl label was a bit exaggerated declaring she is not an alcoholic and never abused prescription drugs.

Likening her late teens in Hollywood to that of going off to college and experimenting, Lohan feels she didn’t do anything a normal college student wouldn’t have done, it’s just that her wild ways were played out in front of the public eye.

In the interview, she blames her problems on a lack of structure, coupled with lots of money. And oh, yeah, her father Michael Lohan’s absence from her family and media attention-seeking behavior didn’t help either.

“I think if anyone should be looked at medically it’s him. He has such a big chemical imbalance at this point because of all the things he’s done to himself. The worst part of it is you turn around and you see your dad crying and normally you’d be, like, happy that your father’s there. But then he has to go and do an interview right after.”

Looking forward, the once promising star is ready to get serious about her career again telling Vanity Fair, “I want the respect that I had when I was doing great movies. And if that takes not going out to a club at night, then so be it. It’s not fun anyway. I don’t care. It’s the same thing every time.”

Here’s hoping Lindsay Lohan is now on the right path.