When we grow up, we want to be Cameron Diaz.

Yesterday, Cameron, who was recently named the greatest modern day blonde in a poll conducted by Clairol and came in at number four of all time behind ultimate icons Marilyn Monroe, Grace Kelly and Brigitte Bardot, turned 38. And sister has never looked better! 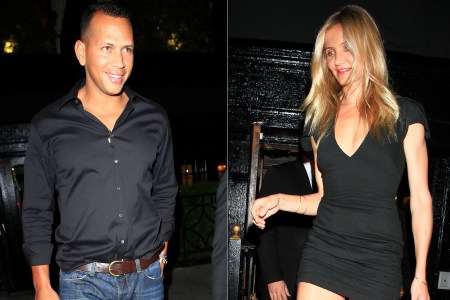 While they haven’t officially announced their coupling, Cameron and Alex, who previously dated other luminary blondes Madonna and Kate Hudson, seemed mighty cozy and have been linked since May.

When asked if they were a couple, Cameron Diaz laughed, “No, no, no. I’ve been in relationships since I was 16 years old. In the past three years I’ve made a conscious decision not to be in a relationship for as long as I want. I want to have a relationship with myself right now.”

Well, if we looked as good as she does, we’d want to date ourselves too. Thirty-eight looks like it’s going to be a good year for Diaz.

Diaz recently wrapped production on The Green Hornet, co-starring Seth Rogen and due in theaters January 2011, and Bad Teacher — which reunited her with her ex-boyfriend and former Shrek co-star Justin Timberlake — is due out in April 2011.

Read on for more Cameron Diaz