Big questions surround True Blood as it heads into its season finale. Will Eric go up in sunny flames with Russell? Will Jason survive the panthers’ battle against the DEA? Will Sookie forgive her vamps for using her blood in their newest ploy? True Blood fans have to wait until the September 12 finale for most of those answers, but SheKnows found a few teasers to hold you over. 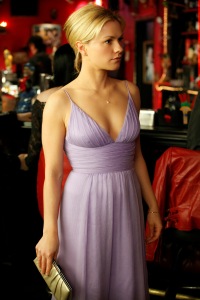 The penultimate episode of True Blood was a doozy. Forget the simple days of vampires and shape shifters. After this season, we know sleepy little Bon Temps is also host to fairies, werewolves, inbred werepanthers, Wiccan witches and maybe even a demon in hunky disguise.

With the title Evil is Going On, the third season finale of True Blood promises a storm of destruction.

In case viewers were thinking anyone was safe, this week’s episode was preceded by a memoriam for all those characters True Blood has already killed off. No one is safe!

This may not bode well for Tommy, who went into Sam’s safe after his big brother raged against him and everyone else in Merlotte’s. That angry sex with Tara won’t quell the shape shifter’s fury when he finds out what little brother did.

“Someone in my camp is in big trouble,” Sam Trammell told E! “Someone’s in danger.”

Poor Tara, she’s always with the wrong guys at the wrong time. She’s going to see yet another side of crabby Sam.

Meanwhile, after this week’s feeding frenzy, Sookie (Anna Paquin) is definitely over being vampire crack. Having been sucked almost dry again thanks to Eric and Bill’s plan to take down Russell, she starts to consider life without Bill.

“She can’t stay with Bill forever, you know,” Alexander Skarsgard told E! “They can be super happy in real life, but on the show we need some drama. That’s my job, I guess, to stir it up a bit.”

As expected, Eric and Russell will survive their brush with the sun. After all these years on the planet, Eric will be left reassessing his morality, but that won’t stop him from continuing to plot his revenge. “Very shocking on every front,” Marshall Allman (Tommy) teased of the finale. “I think they did an excellent job of the cliffhanger this year for my character, for Anna’s character (Sookie) and for Alex’s character (Eric), too.”

The true romance budding for Lafayette took a nasty turn in the last episode. His shared V-high was an eye opener, seeming to reveal a mysterious family heritage of magic for both him and Jesus. It was a beautiful trip, quickly ruined by a V-flashback that turned his boyfriend into a demon.

The finale has more visions in store for LaLa and when he turns to Jesus for help, he’ll learn more about what his new boyfriend offers, not to mention something new about himself. “I am happy with the way [the finale] sets up for next season,” Nelsan Ellis (Lafayette) teased. “I think [fans] will be pleased at what they find out about Lafayette.”

As for ditzy hero Jason, he doesn’t seem cut out for life as a lawman, but his run with the panthers may lead to a new gig.

The True Blood finale airs September 12 on HBO and by the close of the season, Bon Temps will be set up for a new breed to take the foreground in season four.

“Next year is the year of the witch,” teased Lauren Bowles (Holly).