SheKnows: Justin said you were a good kisser, was the scene kissing him a torture, or what? 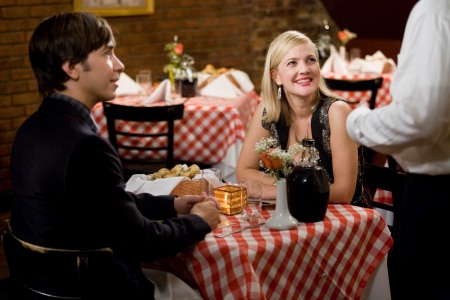 Drew Barrymore: [Laughs] I just was lucky because he’s a good kisser. It’s like, “Whew, thank God.” The worst for me is kissing someone who is not a good kisser and you’re trying to make it look good and you feel like you’re just working on your own. At least it was a real team effort.

SheKnows: Justin’s character adores his Tom Cruise posters, what is the most valuable item in your house?

Drew Barrymore: Well, any of my dogs are my most cherished things, I’d have to say.

SheKnows: Now in the phone sex scene, you and Justin are having trouble, ahem, and Justin mentions thinking about Marky Mark — does Mark Wahlberg know about this scene? 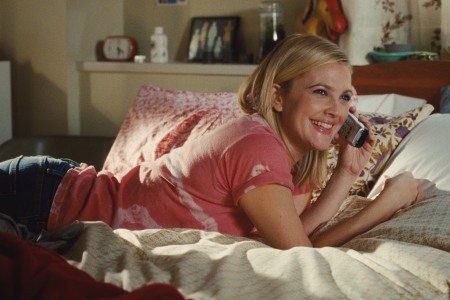 Drew Barrymore: Oh my God, I did tell him that [laughs]. I ran into him in an awards show and I was like, “I just want you to know how hot you are in your underwear and you’re cute and sexy!” And who would not be excited about that? I’ve had other conversations with him that went much better than that. He’s a very nice guy. That was a great scene as written and I was really excited to go out there and try it, because I thought, “This is one of those scenes that’s going to fail miserably, and be like a really gross, upsetting, moment or it could be fun and exciting.” It was just one of those scenes like you just have to kinda go for it not knowing if it’s going to work or not, but don’t compromise along the way because you’re afraid of it. 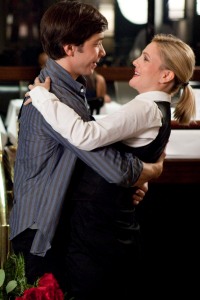 SheKnows: The film is escapist fun, but it is also so real…
Drew Barrymore: I just feel like, I personally want something that I can escape into and forget what’s going on around me, but I don’t want to lose sight of being able to relate to something. So for me I just want that beautiful, striking balance and I feel like this film has that. I’m laughing, but I’m crying and relating and emotional about it. I feel like it gets surprisingly real, but then it does come and save you and make you laugh.

SheKnows: OK, Justin was also asked, so here goes: Music is a huge part of Going the Distance, what are your favorite albums?

Drew Barrymore: Okay, I’m on it. [Long pause] Spank me! No, I’m just kidding. I’m such a music nut too. [Another long pause] Like a Radiohead album. This is really sad [laughs]. It’s like sometimes when someone says “Where do we go for breakfast?” and it’s like you’ve never eaten before. Your brain just goes blank. I’m going to call a brain blank on this one.

SheKnows: Also asked Justin this, what are your favorite romantic comedies?

Drew Barrymore: I’m going to go with Annie Hall, Lost in America and Sullivan’s Travels. Those are some of my favorite movies!