Justin Long is an unassuming movie star and further proof of his uncanny ability to succeed in this business is his latest film co-starring his lady love, Drew Barrymore. Going the Distance is a raucous comedy in the Judd Apatow vein that allows its characters to fully speak their minds without worry of the rating system.

Going the Distance is Drew Barrymore’s first R-rated comedy and her other half in life is also her boyfriend on screen in the romantic comedy that seeks to put the genre right on its head. 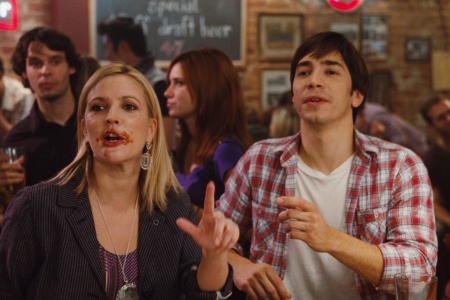 Long is an unlikely movie star in that it is hard to believe that one of the bit players in the NBC modern hit Ed found his way to co-headlining a Warner Bros movie alongside a huge movie star in Drew Barrymore.

SheKnows: First kisses are key in romantic comedies. How do you kiss Drew, someone you know so well, and have it still seem fresh? 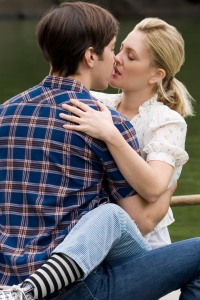 Justin Long: It’s like a necessary evil. We were drunk [in the film]. The first kiss for us in the movie was kind of sloppy. It was just so easy to do. It was so comfortable.

SheKnows: Is it any different when the person you’re sharing the kissing scene with is someone you’ve kissed a few times before? How do you keep it professional?

Justin Long: I like to think about my grandmother — just because she has always been an inspiration to me in my life [laughs]. No, I think you’re invested in the scene, hopefully.

SheKnows: Is that an odd thing kissing someone with a crew of 100 watching? Or is the entire act simply an odd way to make a living [laughs]?

SheKnows: So then having someone you’re familiar with is a huge help — is it ever jarring?

Justin Long: Drew’s a great kisser. I just want to reiterate that [laughs]. But, there can be very little movement involved and then a quick, sudden movement from the tongue that you don’t expect. Yes, it can be jarring.

SheKnows: What was the biggest challenge for you with making Going the Distance?
Justin Long: I would say some of the naked stuff was a little uncomfortable. But, I think the most challenging was to try to keep a straight face around those two clowns [co-stars Charlie Day and Jason Sudeikis, who play his friends]. But, I think a lot of the really intimate, sexual stuff around a room full of 30 to 40 grown men, that was a challenge. 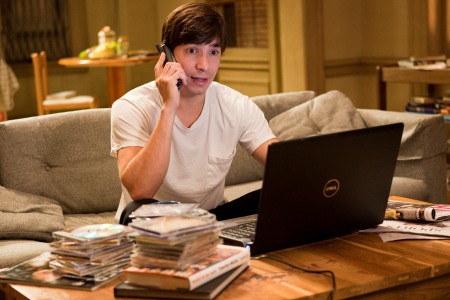 SheKnows: Now, there’s a phone sex scene in the film that is absolutely hilarious. Who do you think had the more difficult time filming it, you or Drew?

Justin Long: We were comparing who had a more awkward experience [laughs], me as a guy in front of a room full of men simulating it or Drew. And I said, “All the guys in my room, all the crew guys, were like trying to make jokes to keep it light. Or they were making sex jokes.” So it made it kind of more awkward, but, in truth, I think Drew had it more awkward. She said everyone in the room was stone-cold silent and respectful, and it just made it that much weirder for her. There were tips flying around, and whispering [laughs].

SheKnows: What are your favorite romantic comedies? 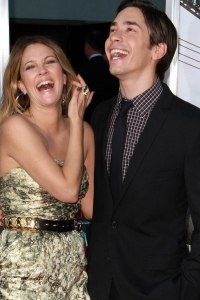 Justin Long: For movies, I’m going to go with Annie Hall, Back to the Future and Way Out West, that’s a Laurel and Hardy movie.

SheKnows: Do you think Going the Distance is a romance for our time in its reflection of our economic situation?

Justin Long: I do. I also think the [economic] realities of the characters play a large part in the story and it was nice to see that played out.

SheKnows: Was it important to everyone with Going the Distance to reflect the financial realities of a long distance relationship?

Justin Long: A lot of people, especially now, can relate to [this] and the things that you take for granted when you enter into a long distance relationship, chief among them the logistics, and just getting from point A to B.

SheKnows: Your character is in the music business and is keenly aware of his musical likes and dislikes. What are your favorite albums?

Justin Long: I would say Joni Mitchell’s Blue and [The Beatles’] Rubber Soul are my top ones. Oh, yeah. The Bieb’s greatest hits, Leave it to Bieber [laughs].