Mad Men star Christina Hendricks has been named the face, and body, of London Fog. 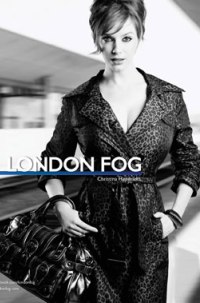 Replacing previous spokesmodels Gisele Bundchen and Eva Longoria Parker, Mad Men star Hendricks’ ads are set to debut in October. They feature the fabulously curvaceous, comely 35-year-old redhead flashing a peek of a lacy black bra underneath a black trench and standing on a train platform in a plunging animal-print coat. Other images include her in a classic khaki trench, sporting a little black dress and in a menswear-inspired button-down shirt and tie.

We wonder what New York Times fashion blogger Cathy Horyn has to say about them.

First of all, Christina Hendricks is far from big. She’s womanly and arresting and shapely and we love every inch of her. Second, don’t hate the player, Cathy, hate the game. No need to be snippy just because Christina has an outrageously slamming body and a stunning face. It’s no wonder she was named Esquire’s Sexiest Woman Alive (knighted such by female readers) for 2010. 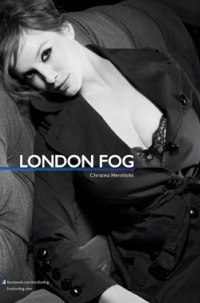 In Capitol File’s magazine’s fall fashion 2010 issue, on newsstands now, Hendricks spoke about attending the SAG awards on the heels of such media criticism at the Golden Globes. “In every photo there’s this look of fear on my face,” she said. “A week earlier I had been so happy and felt so gorgeous and everyone said such mean things to me, so I had this concerned look.”

No need for concern, sugarplum. We wish more high profile women in Hollywood had your curves. It’s such a pleasure to see women onscreen who actually look like women.

However, with the debut of Hendricks’ London Fog shots online, came the inevitable realization that they’d been retouched. They haven’t diminished the size of her assets, just the circumference of her waist. It’s pretty typical fare for the advertising world, but we wish they could’ve stepped away from the airbrush and let Christina Hendricks’ natural beauty speak for itself. We like her just the way she is, thank you very much.

Also in Capitol File magazine, Hendricks said, “I’m really trying to remain true to myself. Hopefully, people will see who I am and accept it.”

Not only do we accept you, Christina, we give you two snaps up with a twist in an hourglass formation.