Oh, Twitter you never let a girl down. Our favorite little mean girl, Lindsay Lohan, couldn’t help herself when she used Twitter to blast the paparazzi. 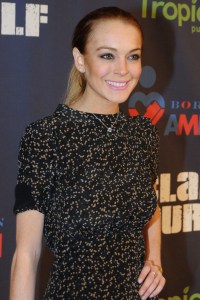 On August 24, Lindsay Lohan was released after 23 days of court-ordered rehab. Not only did the star not serve her full 90-day order but she also got back behind the wheel and tweeted about it.

Lindsay Lohan must have been feeling Twitter withdrawal during her time in the slammer and rehab. Just days after being released from rehab the star aimed her first tweet against the paparazzi.

Lindsay Lohan wrote in her first tweet after being locked up on July 20:

“Clearly…Paparazzi shouldn’t be allowed to take pictures or video while someone’s driving or at a stop light. 4every1’s sake”

Lindsay Lohan, 24, got her license back on August 25 and immediately the paparazzi pounced. Pictures started popping up of little miss Lindsay driving a hot Maserati sports car. Snapshots also caught the starlet picking up friends well after midnight in Los Angeles. The star’s license was originally suspended in 2007 due to a drunk driving and cocaine possession charge.

Lindsay Lohan’s hard-partying ways and stints in rehab since 2007 have overshadowed the young Hollywood actress’ career. The star, who was released from rehab the same day as the premiere of her latest movie, Machete, opted to stay away from the event. While her part was minor, Lohan’s lacking presence at the event was felt as stars wished her well from the red carpet.

After this latest rehab debacle Lohan was ordered to remain in Los Angeles until November 1 by a judge. The Freaky Friday star will reportedly undergo biweekly drug and alcohol testing, and continue drug and behavioral therapy.

Apparently the harsh reality of rehab and downward spirals aren’t keeping the endorsements from pouring in. Allegedly a New York area radio station offered Lohan and her mother $1 million to host a morning radio talk show together. What could these two possibly have to talk about? Reports say if the two enter into a deal with the radio station they will cover all aspects of style and entertainment with their listeners.