The Emmys are moving with the times this year. Not only can fans help draft presenter introductions via Twitter, but they can also go backstage and on the red carpet via a live Ustream feed.

Since landing the gig of Primetime Emmy Awards host, Jimmy Fallon has been racking his brain for a way to let fans get their voices heard on the show via Twitter. 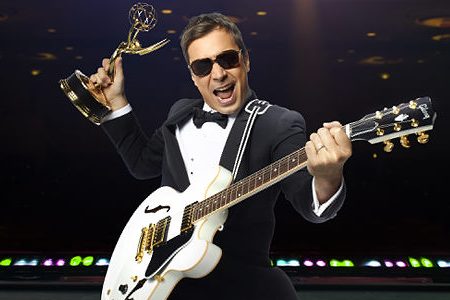 “I sat down with my writers, and asked, ‘What can we do, how can we make [The Emmys] interactive?'” Fallon explained in a conference call with reporters. “We decided we could have people tweet if they wanted a Boy Meets World reunion…but we couldn’t get Topanga. She didn’t sign on.”

That idea was a bit over the top, but Fallon and team came up with another good idea that would give fans the opportunity to help write the show!

Fans submit their ideas by signing into their Twitter account and following the directions at NBC’s I’m On The Emmys page. Then Fallon and his Emmy writing team will incorporate the best tweets into the show.

“Jon Hamm himself could tweet in and say, ‘This man is bigger than Jesus,’ and that could be the one we choose,” Fallon quipped. “We thought it was a pretty cool idea, because this technology didn’t exist in the past, but now Twitter is out there and happening.”

Fallon’s Emmy crew will be considering submissions up to the very last minute. “You can tweet something from your living room and five minutes later it’ll be on TV,” Fallon said. “We’ve done this on our show [Late Night with Jimmy Fallon] before and it’s a lot of fun.”

Fans will also have a chance to go behind the scenes by following a live feed at Ustream.com. NBC will set up seven cameras to “eavesdrop” on Emmy nominees, presenters and performers backstage. There’s even a live “thank you” camera, in case any Emmy Award winners have more to say after the music plays them off stage.

If that’s not enough access, NBC is also letting fans onto the red carpet to ask their own questions!

The carpet action will be streaming live at AccessHollywood.com, Emmys.com and Ustream.com starting at 4 pm Pacific and 7 pm Eastern and fans can suggest questions to correspondent Laura Saltman via Twitter, using the hash tag #emmys10, or submit them via the NBC.com Emmy website.

The 62nd Annual Primetime Emmy Awards will be broadcast live coast-to-coast from the Nokia Theatre LA Live in Los Angeles on Sunday, August 29 (5 pm Pacific and 8 pm Eastern) on NBC.