Miley Cyrus has dumped Australian actor Liam Hemsworth, who she met on the set of The Last Song. 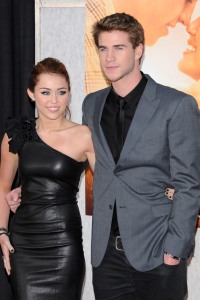 Currently, the Hannah Montana star has been linked with her LOL costar, Adam Sevani. Miley Cyrus and Sevani have reportedly been getting close on the set of LOL in Detroit.

Don’t cry for Liam Hemsworth, he is busy too with a new young woman he met in early August at the US Open Surf Competition.

Miley has dissed Liam to the press more than one time. “His taste is a little odd. I have a problem with people who wear board shorts when they’re not going to the beach, and he’s constantly in surf trunks.”

In an interview with Teen Vogue she said about Liam, “I think we’re both deeper than normal people — what they think and how they feel. He’s very grateful for what he has, but he doesn’t let it go to his head. I’m like that too.”

Miley Cyrus also talked about her album Can’t Be Tamed and said that it was heavily inspired by Liam, especially one key song. “He likes Permanent December, I think a lot, but only because it says Australia and he’s Australian, so he likes that it says that,” she said with a smile. “And he loves Tamed. He’s trying to make me teach him the dance, but I refuse to do it.”

Miley Cyrus and Liam Hemsworth met on the set of their movie, The Last Song. She met this new guy on a movie set. Do I see a pattern here?

Miley Cyrus talks The Last Song
Is Miley Cyrus’ new video too hot?
Miley Cyrus wants a Sex and the City for teens