Looks like Bristol Palin is using a fascinating form of therapy to get over ex Levi Johnston — by joining Dancing With the Stars. 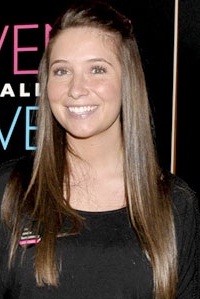 Reports are surfacing that Bristol Palin has signed on to grace Hollywood’s most sought after dance floor — Dancing With the Stars.

ABC is set to unveil the official cast of performers for the 11th season of Dancing With the Stars during the Monday, August 30 episode of Bachelor Pad. E! is reporting some of the contenders rumored to be on the list, including Bristol Palin.

If Bristol Palin does don her dancing shoes as expected, this wouldn’t be the first time the daughter of Sarah Palin partnered with ABC. America’s most talked about teenage mom appeared on an episode of ABC Family’s The Secret Life of the American Teenager, mirroring a message from her own teenage pregnancy.

Bristol Palin might be using her own form of relationship therapy with reality show rebound syndrome, but she’s not the only one. Ex Levi Johnston, whom Palin split with for a second time recently, is shopping his own show. Johnston’s dip into the reality pool is reported to follow his quest to become mayor of Wasilla, Alaska.

Other rumored stars to be competing for the coveted mirror ball trophy are David Hasselhoff fresh from a Comedy Central roast, The Hills star Audrina Patridge, and R&B singer Brandy.

In a Jerseylicious twist, Jersey Shore’s The Situation is expected to bring his abs to the dance floor and fist pump his way to the title.

In a bold move, it looks like ABC won’t be including The Bachelorette or The Bachelor contestants like they have in the past. This for me is particularly a bummer because Ali Fedotowsky would have been fun to watch and would have given Melissa Rycroft a run for her money.

As for the official line-up, an ABC rep is saying, “We don’t comment on casting rumors.”

Stay tuned to Bachelor Pad August 30 to see the live announcement of the 11th season of Dancing With the Stars. Should Bristol Palin make the cut as expected, this could be the craziest cast in DWTS history. The Hoff, The Situation, and America’s favorite teenage mom all on one floor — it will be chaotic to say the least.