Elin Nordegren told her side of the story and now Tiger Woods has his turn. What did Tiger Woods say?

Elin Nordegren broke her silence to People magazine, just days after her divorce to Tiger Woods was final. She was candid about her relationship with Woods and what led to their divorce. The Swedish-born beauty told People she “had been through hell” and revealed she “never suspected” Woods was cheating. 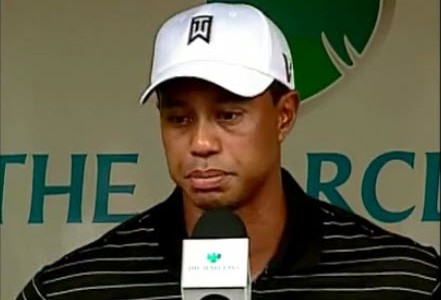 With every side comes the flip and Tiger Woods took his own chance to address the scandal that not only took down his marriage but his golf game as well. The world’s most famous golfer spoke candidly after his practice round at The Barclays tournament in Paramus, addressing both his life on the golf course and off. The Barclays event will be Tiger Woods’ first tournament since his divorce with Elin Nordegren was finalized August 23.

“It’s a sad time in our lives. And, you know, we’re looking forward in our lives to how we can help our kids as best we possibly can. That’s the most important thing,” Tiger Woods expressed to reporters about his children with Elin Nordegren.

Tiger Woods has struggled with his golf game since April. The dynamic pro admitted it isn’t easy to focus on golf given his personal problems.

“At times, it was difficult. You try to block it out as best you possibly can and focus on a shot, but at times it certainly was,” Tiger told reporters. “It’s one of those things where, it’s a sad time and we’re going through it right now and as far as my game and practicing, that’s been secondary. We’re trying to get our kids situated to our new living conditions and how that’s going to be and that’s where our focus is at right now.”

Tiger Woods also addressed any regrets he has in regards to his admitted infidelity and divorce.

“You don’t ever go into a marriage looking to get divorced. That’s why it is sad,” he added. “My actions certainly led us to this decision. I’ve certainly made a lot of errors in my life and that’s something I’m going to have to live with.”

Tiger Woods does admit he has found some positive light in regards to the highly public Thanksgiving car crash that sent his life into a spiral.

He told reporters, “You have to find the positives. Even though there are a lot of negatives, I think that’s actually a good thing because I learned a lot about myself and how I can become a better person.”

As for Elin Nordegren, Tiger said, “I wish her the best in everything.”