No one has signed on the dotted line, but word is Katie Holmes is considering a gig as Adam Sandler’s wife and sister-in-law in his upcoming comedy, Jack and Jill. 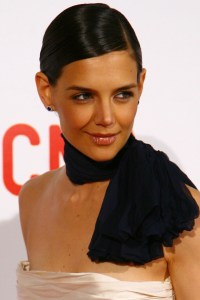 Mrs Tom Cruise is currently working to bring Jacqueline Kennedy Onassis back to life for the History channel miniseries The Kennedys, but THR says she’s already got her eye on her next project.

Katie Holmes is apparently “in talks” to play Sandler’s wife in Jack and Jill, a comedy that will have Sandler playing both title roles. That means she would also be playing sister-in-law to Sandler in drag.

The gist of the film is that Jack’s twin sister Jill comes to town for Thanksgiving and won’t leave. Al Pacino, who somehow factors into the story, is set to play himself.

With little Miss Suri Cruise growing up, Holmes has thrown herself back into work and in contrast to big budget hubby Tom Cruise, she seems to have a penchant for offbeat limited releases and Indies. This may not be by choice, but it’s working for her.

Since graduating from her first gig as Dawson’s Creek‘s Joey Potter, Holmes has had a shaky career. While 2005’s Batman Begins was a hit, she’s released her share of big budget bombs over the years.

Holmes seems to fare best in smaller projects like Pieces of April, Thank You for Smoking and Mad Money. They give her a chance to shine, while pairing her with some impressive industry folk.

In this summer’s quiet release The Extra Man, she worked alongside the likes of John C Reilly, Kevin Kline and Cathy Moriarty. Her indie The Romantics, due out September 10, stars Anna Paquin, Josh Duhamel, Adam Brody and Elijah Wood. Holmes is also listed alongside Guy Pearce in Guillermo del Toro’s Don’t Be Afraid of the Dark, due out in January.

If Holmes signs on to Jack and Jill, this won’t be her first time sharing credits with Pacino. Their movie The Son of No One, which also stars Channing Tatum, Juliette Binoche and Ray Liotta, is in the can for a 2011 release.

Working with Adam Sandler in Jack and Jill would give Holmes a run at big budget laughs, but as of now, the Happy Madison production has only two cast members in stone, Sandler and Pacino. It’s set to hit theaters November 11, 2011.

Read on for more Katie Holmes