Now that Lindsay Lohan is out of jail and rehab, there’s apparently going to be a few court-mandated changes made in her life. 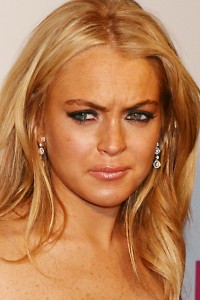 Lindsay Lohan’s attorney Shawn Chapman Holley met with the new judge, Elden Fox, presiding over the troubled starlet’s case. The first positive step the judge made was banning media cameras from the courtroom, even though Lindsay Lohan didn’t attend the hearing.

Despite not being allowed inside, Shawn Chapman Holley filled the awaiting media in on the judge’s ruling once she stepped outside.

According to E! Online, Lindsay Lohan will be required to live in her West Hollywood home until her next court date which is November 1. If she sticks to the terms of her probation she can then move out of state.

Shawn Chapman Holley must also provide a biweekly compliance report to the court.

Can Lindsay Lohan adhere to such a strict schedule of self-improvement? She better, considering if she misses any tests or violates any terms of her probation, it’s back to jail for 30 days.

Lohan’s lawyer is confident her client, whose under-the-influence drug counts were also dismissed, is on a clean and sober path, as she stated, “She is very serious about her sobriety. She looks forward to proving to the court that she is serious. She has learned her lesson and is going to move forward in a positive way.”

Lindsay Lohan’s first act as her new self is to skip this evening’s screening of her movie Machete. Hopefully it’s just the first in a long line of good decisions.