Elin Nordegren has broken her silence and is talking about her stunning betrayal at the hands of Tiger Woods. 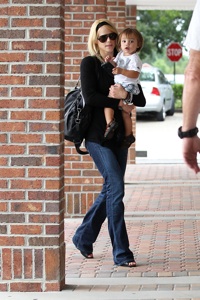 With the ink barely dry on the divorce papers, Elin Nordegren is telling her side of the sordid Tiger Woods tale nine months after the saga began with an interview, albeit a rather softball one, with People.

Elin spoke to the mag for nineteen hours over four days, and says she was just as shocked as the rest of the world to find out that the carefully constructed world of Tiger Woods was a lie.

And like us, she had no idea he had dozens of women waiting in the wings. “I’m so embarrassed that I never suspected [his affairs] — not a one,” Elin told People.

While she wouldn’t go into much detail about the Thanksgiving incident that left the couple’s dirty laundry on their front lawn for the world to pick through, she did say that any intimation that she went after Tiger with a golf club is “ridiculous.”

But the last nine months have been completely devastating for her and the children, nonetheless. Faced with the fact that what she thought was a real, loving marriage was just a front for a well-oiled publicity machine, Elin’s entire world view has been turned on its head.

“The word betrayal is just not strong enough,” she told People. “I have been through the stages of disbelief and shock to anger and ultimately grief over the loss of the family I so badly wanted for my children.”

The stunning blond has one less thing to worry about than many newly-single moms: Money. While Elin declined to name the exact amount of her divorce settlement, it is rumored to be upwards of $100 million. She won’t be spending her days rolling around in Tiger’s cash, though. Elin has been quietly working on a degree in psychology and hopes to eventually be a therapist.

“My immediate plan is for the kids and me to continue to adjust to our new situation,” she said. “I am going to keep taking classes, but my main focus is to try to give myself time to heal.”

Tiger is still a big part of the lives of the couple’s two children, and Elin plans to raise them in South Florida near the home the pair shared during their marriage.

So don’t feel bad for Elin. Although she’s been dealing with a nightmare that turned the stomachs of wives everywhere, her grace and independence have carried her through beautifully.

“I also feel stronger than I ever have. I have confidence in my beliefs, my decisions and myself,” she said.