Billy Joel will be the next superstar to lend their musical catalog to Glee and its creator Ryan Murphy. 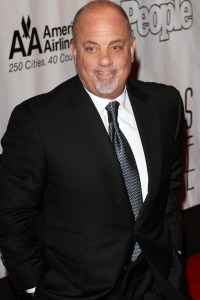 Gleeks were wowed during a season one episode of Glee when Matthew Morrison (Will Schuester) and guest star Neil Patrick Harris famously belted out Billy Joel’s, Piano Man, in perfect harmony.

It looks like Fox’s hit show and creator Ryan Murphy will be seeing more of the iconic music man’s library in the future. Access Hollywood‘s Shaun Robinson asked, “Would you sign off on a Glee episode of Billy Joel?” And the singer revealed, “I already did.”

Access Hollywood slyly asked if the process had already started. “I have no idea. All I know is I said, ‘Yeah! Go ahead,'” Joel said. “Use my stuff, I was in a chorus when I was in high school, why not?”

But don’t get too excited Glee fans. Turns out Billy Joel isn’t looking to guest star on the Fox phenomenon. “No,” Joel said of appearing on the episode. “I’m just not a big TV actor type of guy, I’m a piano player.”

Besides Gleeking out and lending a song or two from his musical catalog, Billy Joel has been busy with the documentary, Last Play at Shea, which includes Joel’s 2008 closing concert before the stadium was closed down.

If you can’t wait to get your fix of Glee, catch the Primetime Emmy Awards August 29. Fox’s breakout show is up for a whopping 19 nominations. Watch those Emmys closely, Ryan Murphy might prove unstoppable with Glee glory!