With her most recent film, The Switch, a mere whimper at the box office, Jennifer Aniston is getting ready to growl and roar. The former TV deity is moving into Cougar Town alongside her Friends co-star Courteney Cox for the second season premiere of the ABC hit.

Cougar Town, the mystifyingly popular sitcom (seriously, that’s still on the air but Pushing Daisies and Dirty Sexy Money got canned?) about a recently divorced woman re-entering the dating scene in a town filled with younger men, will feature Aniston as Cox’s psychiatrist, Bonnie. 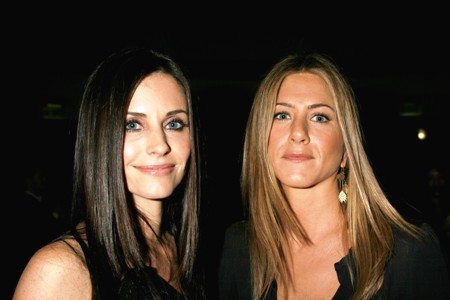 “Those guys are so close in real life they kind of do that for each other anyway,” he said of Cox and Aniston, adding, “Bonnie has the life Jules wishes she has.”

This pairing is Aniston and Cox’s second small screen reunion since Friends went off the air in 2004. The real-life best friends also appeared together — and shared a much-hyped but rather tame Sapphic smooch — three years ago on FX’s Dirt, which Cox starred in and we’re still mourning the show’s cancelation.

If Aniston’s Cougar Town appearance plays well, her guest star appearances might become more frequent. “We’re very intentionally implying that it’s a therapist Courteney has been using for a while, and we’re certainly not going to make it like they’ll never see each other again,” Lawrence said. “So I’m crossing my fingers that if she has a good time it’ll happen again.”

While Aniston has had occasional big screen success in recent years, like 2008’s Marley and Me and 2006’s The Break-Up, a return to the small screen might be best for her.

Last week, The Switch bombed at the box office, opening in the eighth spot with just $8.1 million, and earlier this year her film The Bounty Hunter was panned by critics and did only modest business with audiences. It’s not like she’s David Schwimmer or anything, but Aniston isn’t the mega movie star people once hoped she’d become.

Cougar Town premieres on ABC on September 22 with the Jennifer Aniston episode!