Taylor Lautner has the boy next door looks with a sweet smile to boot, but when it comes to his trailer, this Twilight werewolf means business. 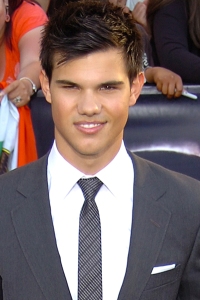 Taylor Lautner allegedly put an RV company in the hot seat for not delivering his personalized trailer in time for the shoot of his new movie Abduction.

The 18-year-old’s lawsuit against the RV company was filed August 23, in a Los Angeles Superior Court. Taylor Lautner claimed his dad, Dan Lautner, made a deal with the RV company based in Irvine, California. Allegedly McMahon’s RV dealership was to deliver the Twilight star’s $300,000 customized 2006 Affinity Country Coach RV by June.

The June deadline was to meet standards of keeping the 18-year-old teen wolf comfortable on the set of Abduction.

Taylor Lautner and Shark Kid Entertainment decided to sue for breach of contract and fraud when the deadline supposedly came and went. Allegedly Lautner is seeking unspecified damages.

While Abduction might be the talk of Taylor Lautner’s lawsuit, the real hot topic for Twi-hards is the next installment of Twilight. Reports say Lautner and his castmates will begin filming the next Twilight installment, Breaking Dawn, in Louisiana during the winter.